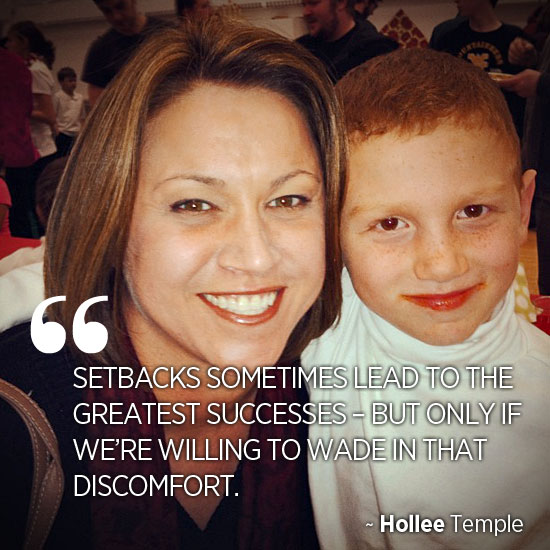 It’s painful to see your kid struggle. And yet one of my favorite recent “mom moments” resulted from a setback that my younger son experienced.

The setting was my living room, where a handful of kids were participating in a low-key piano and voice recital for a group of friends and family. “Hank,” as the child I named Henry is now calling himself, was about to sing his solo when he got choked up and tears started to flow. He tried once, but ran out of the room after the second measure. He tried again, and still couldn’t make it through the opening phrase. He managed to get through “Happy Hanukkah, My Friend” on the third try. Mercifully, the recital ended soon after, but Hank was weepy for days. He had tried but not succeeded — at least not according to his standards.

And here was the kicker: that was just the warm-up! Hank was scheduled to sing this solo piece in front of hundreds of strangers at his children’s choir concert the next week. Now, on top of the challenge of singing alone to a crowd, he had the memory of his “failed attempts” to overcome. Over the next week, he played out numerous “what if” scenarios. Of course he wanted to give up. And a part of me, witnessing his perpetually puffed lower lip and droopy brown eyes, wanted to let him.

But then I got a grip. I told him he needed to work hard and do his best, and if the result wasn’t what he was hoping for, well then, he wouldn’t have to sing a solo again. But he had committed to his director and his fellow choir members, and I wouldn’t let him wiggle out of this tight spot. The game was on.

On the night of the concert, I slapped on my “calm mom” smile and assured Hank that I believed in him. The concert began, and I tried to enjoy the angelic voices for the first few selections. But as Hank’s moment in the spotlight drew closer, I realized that I had been holding my breath the whole time. For a moment, I doubted my parenting instincts, and wondered if I was pushing my eight-year-old a little too hard.

When the piano started playing the first few notes of Hank’s song, I took my first deep breath of the evening. My friend Wendy, sitting next to me, instinctively reached over to squeeze my hand, and I clung to her. Together, we listened to his tiny voice filling the chapel, and my face beamed with pride. Hank delivered a pitch-perfect performance.

After the show, audience members crowded Hank, doling out high-fives for his bravery under pressure. He glowed. He had learned that he could overcome his fear, and the reward was even greater than he had imagined.

I enjoyed the compliments, of course, but moreover, I remembered that setbacks sometimes lead to the greatest successes — but only if we’re willing to wade in that discomfort. In that moment, I was so glad I had.

There are so many touching moments as a parent. Share a favorite memory in a comment below.

A “Mom”ent Only a Mom Can Handle

One of our own favorite moms, Harmony Faust, recently became a mother to the adorable Henry, and she’s learned very quickly some of the trials and tribulations of being a parent. Check out her “Mom”ent to see why being a mom is sometimes more of a “poopy” job than one expects. My friends with babies […]

My Fave Mom Moments Are The Silly Ones

Being a Mom is challenging. Up-all-night-on-barf-patrol, breaking-up-sibling-squabbles, finding-a-bathroom-for-a-potty-training-toddler – challenging. Being a Mom is also miraculous – baby’s-sweet smile, first-steps, watching-them-sleep miraculous. But the Mom moments that keep me going during long, challenging days are the silly ones. I was having one of those challenging days. It started out with an important meeting around a […]

Potty Training and Your Child