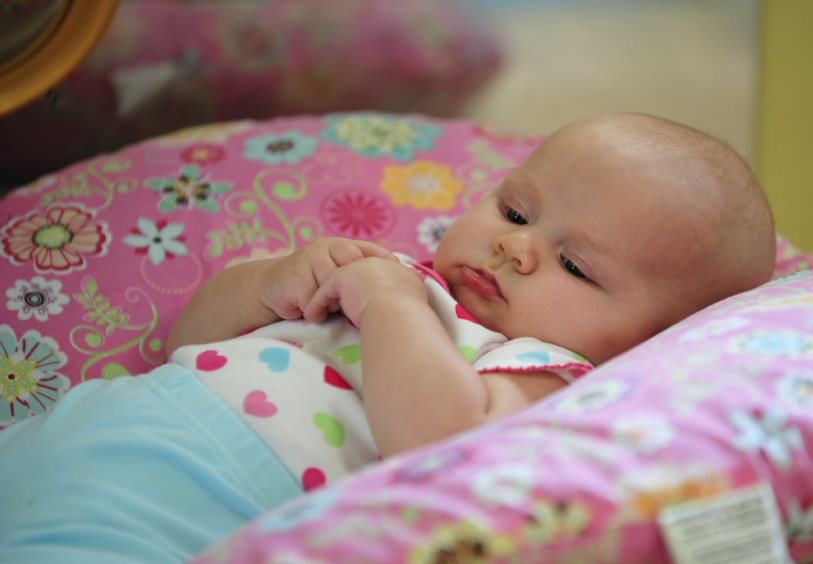 Babies cycle in and out of sleep continuously for their first three months or so. After that, they usually settle into three fairly dependable naps every day. Until one day, when those naps aren’t so dependable.

Your baby’s need for sleep changes over the weeks and months as her brain and body grows. Nap transitions are one of the most confusing and challenging tests of new parenthood. A fussy, cranky, non-napping baby makes us wonder if our little one is teething, sick or just sleepy. We want predictability, but she has other plans.

Dropping a nap might be the answer, but it’s not as simple as it sounds. When health-related causes have been ruled out, go ahead and experiment with her sleep schedule.

– It’s time to drop a nap when your baby happily plays (or fusses) through it for four or five days in a row (not due to illness or major household changes).

– After dropping a nap, space the remaining naps out so there is enough sleep coverage to last her through the day.

– Temporary fussiness is part of the equation. She will be overtired for a few days until she adjusts to the new sleep routine.  Spending more time outdoors having fun will make it easier on everyone – AND tire her out so she’ll sleep better when it’s time.

– If she is napping too much during the day you may find that she wants to stay up later at night. Mom and Dad need their evenings together; so drop (or limit) a nap, resisting her urge to stay up late.

– It’s NOT time to drop a nap if she always falls asleep in the car — or regularly awakens cranky.

– Watch for signs she might need more sleep on a particularly sleepy day. She may be growing or fighting off a cold. Extra sleep will help.

Transitioning from Three Naps to Two

– This usually happens from 6-9 months, and corresponds to an enormous jump in your baby’s memory, motor skills, and overall brain development. Sleep is bound to be disturbed by her new skills. Aim for consistency, but be flexible.

Transitioning from Two Naps to One

– This usually happens between 12-24 months, when she can handle a long stretch of wakefulness.

– Slowly move naptime toward a single mid-day nap by 15-minute increments. Allow a longer nap, and move bedtime earlier during the transition.

– Maximize her outside “running around” time to ensure good, solid rest. Allow enough time to get home from the park to prevent car/stroller naps, when possible.

And don’t be tempted to eliminate naps completely. Only a small minority of babies drop all naps before two years of age. Take advantage of the break to get some rest yourself!

Only two of my four babies were regular nappers. What about yours? Share your stories with us!

Dr. Wittenberg is a psychologist specializing in the development of babies, toddlers, preschoolers — and parents. She offers no-hype, practical parenting advice on her blog BabyShrink — rooted in science, and road tested in her own home as the mother of four young children. She has helped thousands of parents over the years and knows that the most common problems with young children — sleep, feeding, potty training and behavior — can be the most difficult ones to solve.

The way we, as parents and caregivers, respond to children’s questions and worries will help them through difficult times and teach them to cope during future challenges.  We wanted to provide you with information to help you recognize signs of stress in children and offer you suggestions for helping children manage stress.
July 10th, 2018