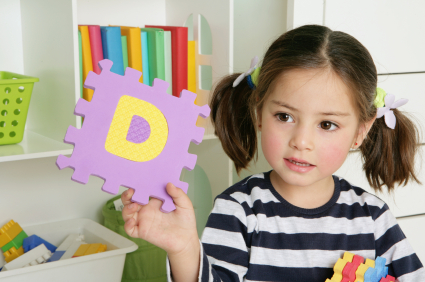 Toddlers start to learn the alphabet by exposure. Seeing, hearing and playing with letters is the best way to start learning the alphabet.

1. Letter Sort –  Get out your alphabet letters (foam, magnetic, any kind). Sort by colors, shapes (curvy or straight), letters in the child’s name, or by any criteria you can think up. Say the names of the letters for your children but don’t worry if they don’t remember. At this age you are introducing letters.

2. Road Signs Alphabet – What letters does your child know? Practice and reinforce the letters by looking for one at a time on road signs. Find all the A’s you can find. For kids who know the entire alphabet, go in alphabetical order and find each letter of the alphabet.

3. Alphabet Hopscotch – Make a hopscotch grid. Instead of numbers, write letters. Play by saying the letters when you land on them.

4. Find the Letters – Hide letters (foam, magnetic, any kind) in sand or rice. Say, “Ready, Set, Go” and have your child find all the alphabet letters as fast as he can. After all the letters have been found, say to your child, “Wow, you found the letter D. Can you say D?” Go through all the found letters in this way.

Preschoolers are starting to recognize letters. They can learn the names of letters, what the letters look like, the letter sounds, and how to write letters with playful games.

1. Alphabet Memory – Make or buy 2 sets of alphabet cards. To make, write on index cards. Take out 10 letter pairs for an easier game. Play like any memory game – players turn over 2 cards and try to find matches. The winner is the person with the most matches.

2. Alphabet Go Fish – Use the same alphabet card sets as the memory game – and play alphabet pairs go fish. Get pairs (not sets of four).  The winner is the person with the most pairs.

3. Alphabet Bag Sort – Gather small toys and pictures of objects that start with each letter of the alphabet. Get out 26 small paper bags (can be ones you have recycled) and write one letter from the alphabet on each bag. Write Aa for the letter A, for example, and Bb for the letter B on another bag. Let your child play with the bags for several days. Then, take a few bags and mix up the toys. Put an apple in the bag marked Cc, for example. Help your child re-sort the items into correct letter’s bag.

Remember there are lots of other ways you can practice letters: the alphabet song, alphabet books and alphabet toys.

As you play with your children, use the time to teach them something new – a letter’s name or sound, for example. The more you playfully practice, the more letters your kids will know. Can you tell which game is going to be your child’s favorite? 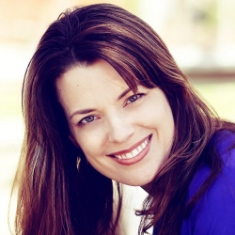 The way we, as parents and caregivers, respond to children’s questions and worries will help them through difficult times and teach them to cope during future challenges.  We wanted to provide you with information to help you recognize signs of stress in children and offer you suggestions for helping children manage stress.
March 2nd, 2020

The benefits of reading go far beyond language and literacy - here, our Chief Academic Officer explains the many different advantages of reading.
February 6th, 2020

No matter the weather, there are many benefits to letting kids play outside! Here are just a few reasons why.
TOP
×